Sam Ben-Meir is a professor of philosophy and world religions at Mercy College in New York City. 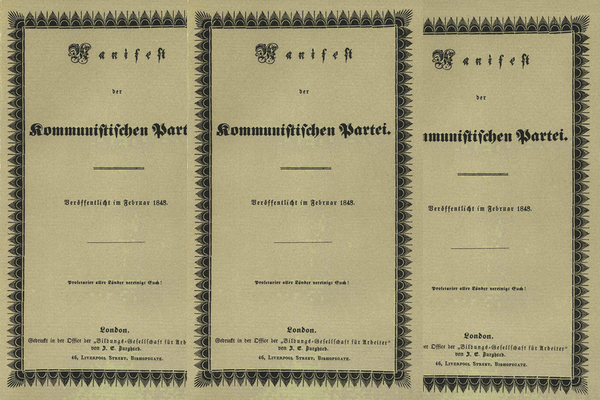 This month marks 172 years since the first publication of the Communist Manifest. All around the world people will be commemorating February 20th with group read-alouds, and other ways of noting the occasion. Undoubtedly, this is a moment that we should not allow to pass without some reflection on the meaning to us today of Marx and Engels’ pamphlet.

Originally published anonymously and in German by the Workers’ Educational Association in 1848, an English translation of the Manifesto would not appear until 1850. For the first decades of its life the Manifesto was mostly forgotten, and it would not be published in the United States until 1872. We are living at a time when – if not communism – at least socialism is gaining ground in this country, to a degree that few could foresee only a decade ago. Bernie Sanders, for example, is a self-proclaimed Democratic Socialist, and a frontrunner among the Democratic candidates seeking the presidential nomination. When it comes to communism, however, there are still grave misgivings about being labeled as such even by those who identify with the radical left.

At the same time, we are entering an era of unprecedented inequality; in which wealth has become concentrated in the hands of a few to a degree that is almost hard to imagine – when literally three or four individuals in this country for instance have the wealth exceeding the total wealth of over fifty percent of the population. The vast inequality and ever growing concentration of capital is one of the many reasons why the Manifesto is as important now – if not more so – than when it first saw the light of day during that fateful year of 1848.

Income inequality in this country has been growing for decades. The Pew Research Center reports that in 1982, the highest-earning 1 percent of families received 10.8 percent of all pretax income, while the bottom 90 percent received 64.7 percent. Three decades later, the top 1 percent received 22.5 percent of pretax income, while the bottom 90 percent’s share had fallen to 49.6 percent. As Helene D. Gayle, CEO of the Chicago Community Trust, observed, “The difference between rich and poor is becoming more extreme, and as income inequality widens the wealth gap in major nations, education, health and social mobility are all threatened.”

The gap between those who have and those who have not is becoming ever wider – while the rights of workers are under attack around the world. Union leaders are threatened with violence or murdered. Indeed, the International Trade Union Confederation reports that 2019 saw “the use of extreme violence against the defenders of workplace rights, large-scale arrests and detentions.” The number of countries which do not allow workers to establish or join a trade union increased from 92 in 2018 to 107 in 2019. In 2018, 53 trade union members were murdered – and in 52 counties workers were subjected to physical violence. In 72 percent of countries, workers have only restricted access to justice, or none at all. As Noam Chomsky observed, “Policies are designed to undermine working class organization and the reason is not only the unions fight for workers' rights, but they also have a democratizing effect. These are institutions in which people without power can get together, support one another, learn about the world, try out their ideas, initiate programs, and that is dangerous.”

In fact, labor union membership has been declining for well over fifty years right here in the US. Unions now represent only 7 percent of private sector workers – a significant drop from the 35 percent of the 1950s. Moreover, studies have shown that strong unions are good for the middle-class; the Center for American Progress reports, for example, that middle-class income has dropped in tandem with the shrinking numbers of US union members. This weakening of unions and collective bargaining has allowed employer power to increase immensely, contributed to the stagnation of real wages, and led to “a decline in the share of productivity gains going to workers.”

Around the world, children are still forced to labor in often unsafe and extremely hazardous conditions. Approximately 120 million children are engaged in hazardous work – and over 70 million are under the age of 10. The International Labour Organization estimates that 22,000 children are killed at work globally every year. The abolition of child labor was of course one of the immediate reforms demanded in the Manifesto – and 172 years later it has yet to become a reality.

Studies estimate that as many as 250 million children between the ages of 5 and 14 work in sweatshops in developing countries around the world. The US Department of Labor defines a sweatshop as a factory that violates two or more labor laws. They often have poor and unsafe working conditions, unfair wages and unreasonable hours, as well as a lack of benefits for workers.

Economists sometimes argue that sweatshops help to alleviate poverty, that as bad as they are they are still better than working in rural conditions. These claims are dubious at best – but more to the point, sweatshops are inconsistent with human dignity. As Denis Arnold and Norman Bowie argue in their essay “Sweatshops and Respect for Persons”: the managers of multinational enterprises that “encourage or tolerate violations of the rule of law; use coercion; allow unsafe working conditions; and provide below subsistence wages, disavow their own dignity and that of their workers.”

It is often assumed – wrongly – that Marx and Engels described in full what they thought the future communist society would look like. But aside from a few tantalizing suggestions they offered very little in this regard – not in the Manifesto, nor anywhere else, preferring instead to analyze the social contradictions inherent to the capitalist mode of production itself – contradictions which they thought would lead inevitably to its demise.

One thing that is clear however from their few suggestions is that workers would not be alienated from the process of production and from the fruits of their labor – which implies something like worker self-management, workplace democracy – or, perhaps most accurately, worker self-directed enterprises, to borrow a phrase from economist Richard Wolff. As Wolff points out, these enterprises “divide all the labors to be performed… determine what is to be produced, how it is to be produced, and where it is to be produced” and, perhaps most crucially, “decide on the use and distribution of the resulting output or revenues.” Such firms of course exist already; most notably, for example, Mondragon in Spain. We know conclusively that workplace democracy can and has been successful – and that they can in fact outcompete traditional, hierarchically organized capitalist firms.

All of which is to say that the Communist Manifesto is not a historical relic of a bygone era, an era of which many would like to think we have washed our hands. As long as workers’ rights are trampled on, and children are pressed into wretched servitude; as long as real wages stagnate, so that economic inequality continues to grow, allowing wealth to be ever more concentrated in the hands of the few – then the Communist Manifesto will continue to resonate and we will hear the clarion call of workers of the world to unite, “for they have nothing to lose but their chains. They have a world to win.”