The Rabbi, the Telegram, and the Holocaust

Dr. Rafael Medoff is founding director of The David S. Wyman Institute for Holocaust Studies, and the author of The Jews Should Keep Quiet: President Franklin D. Roosevelt, Rabbi Stephen S. Wise, and the Holocaust, forthcoming from The Jewish Publication Society in 2019. 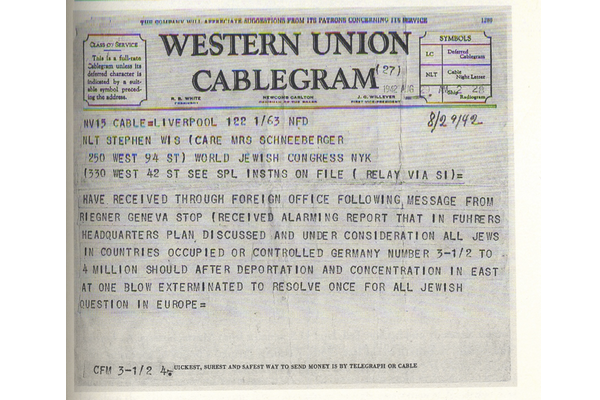 Seventy-seven years ago today, a telegram bearing a horrifying and unforgettable message reached America’s foremost Jewish leader. It revealed the first comprehensive details about the systematic mass murder that would come to be known as the Holocaust.

The author of the fateful message was Gerhart Riegner, a 30 year-old attorney serving as the Geneva representative of the World Jewish Congress, an international Jewish rights organization.

From his post in neutral Switzerland, Riegner had closely followed the scattered reports about the massacres of thousands, then tens of thousands, of Jews carried out in conjunction with the German invasion of the Soviet Union in the summer and autumn of 1941. But he could not imagine that those atrocities were part of some broader genocidal strategy.

In early 1942, Riegner began hearing reports about the mass deportation of Jews to unknown destinations "in the East," never to be heard from again. Then, in August, a German industrialist with close ties to the Nazi hierarchy revealed shocking new information to a Jewish associate in Switzerland, who then passed it on to Riegner. The source said the deportations were part of a plan by Hitler to concentrate "all Jews [from] countries occupied or controlled [by] Germany" in eastern Europe, where they would be "exterminated at one blow" through poison gas.

Riegner did not yet realize that the gassing was not merely a plan, but had been underway in Auschwitz, Belzec, and other Nazi death camps for many months. Still, the new information was crucially important because it revealed that the killings were not random atrocities but rather part of a systematic, organized campaign to murder every Jew in Europe.

Riegner asked a U.S. consular official in Geneva, Howard Elting, to forward the information to the Roosevelt administration and to Rabbi Stephen S. Wise, America’s most prominent Jewish leader. Elting found the news difficult to believe, but he knew Riegner to be "a serious and balanced individual," as he wrote to the U.S. consulate in Bern, recommending that Riegner's message be sent to Washington.

Some other American officials took a different view. Jerome Huddle, at the consulate in Bern, was worried that "the recent agitation" in America about the fate of Europe’s Jews indicated that "there may be a big play soon to get all these people to the U.S.A." Riegner’s telegram might increase demands for admitting more refugees, something that the Roosevelt administration strongly opposed.

Huddle’s colleague, Leland Harrison, grudgingly agreed to send Riegner's news to Washington, but only with a cover note characterizing it as "war rumor inspired by fear." That language was expanded to "wild rumor inspired by Jewish fears" when the State Department later sent a summary of the information to the Office of Strategic Services.

When the telegram reached Washington on August 11, Roosevelt administration officials decided to withhold it from Rabbi Wise. Elbridge Durbrow of the State Department cited what he called "the fantastic nature of the allegation" and "the impossibility of our being any assistance" even if it proved true. In other words, since the administration had already decided it would not admit more refugees or take other steps, providing any kind of assistance was necessarily "impossible."

The Americans, however, were not the only ones whom Riegner had contacted. He also asked the British consulate in Geneva to send his telegram to Sidney Silverman, a Jewish member of the British parliament.

Frank Roberts of the British Foreign Office warned his colleagues that the telegram might ”provoke embarrassing repercussions." Other officials agreed that drawing the public's attention to the Allies' inaction regarding European Jewry might be "embarrassing," but they feared withholding information from a member of parliament could be more trouble than it was worth. The Foreign Office chose to send Riegner’s cable on to Silverman. He, in turn, forwarded it to Rabbi Wise, on August 28, seventy-seven years ago today.

Shortly after receiving the shocking message, Wise telephoned Undersecretary of State Sumner Welles. Welles, feigning surprise and never letting on that the State Department had tried to stop Wise from receiving the news, poured cold water on Riegner's telegram. He told Rabbi Wise the Jews were being deported for "war work."

Welles and his colleagues had already received reports about Nazi mass killings of unprecedented proportions. On July 21, the U.S. consulate in Stockholm, Sweden, sent the State Department a report from Polish officials listing the number of Jews "executed by the Germans" during the previous year: 60,000 in Vilna, 40,000 in Latvia and Estonia, 84,000 in White Ruthenia, 100,000 in Kiev. Still, that was not the same as the kind of systematic, carefully-organized annihilation that Riegner was describing.

Welles asked Rabbi Wise to keep the Riegner information out of the press while the State Department investigated its veracity. Rabbi Wise believed he had no choice but to comply with the request, since he had no way of authenticating the information on his own, and he would need the cooperation of the State Department if the worst turned out be true.

Welles and his colleagues did indeed begin investigating, but the pace of their efforts suggests they did not take the matter very seriously. It was not until three weeks later, on September 23, that the State Department asked the Vatican if it had any information about the mass killings. A curt reply from Rome mentioned only unverified reports about unspecified "severe measures against non-Aryans."

It was not until early October --more than a month after his conversation with Rabbi Wise-- that Welles asked the U.S. consul in Bern, Leland Harrison, to contact Riegner for more information. Harrison then took two weeks to reply.

In the meantime, Riegner had obtained letters from a Jewish refugee in German-occupied Warsaw who eluded the Nazi censors by using Hebrew phrases as codewords. The letters reported that "Mr. Jager [hunter, i.e. the Germans] told me that he will invite all relatives of the family Acheinu [our brothers, i.e. the Jews]; that "Uncle Gerusch [deportation] works in Warsaw; he is a very capable worker" and that "his friend Miso [death] works together with him." Riegner gave the letters to the U.S. consulate in Geneva on September 28. Yet they did not reach the State Department until October 23.

Finally, on November 24, nearly three months after their first conversation about the Riegner telegram, Welles called Rabbi Wise "to confirm your deepest fears." At the same time, Welles made it clear that Wise should not attribute the confirmation of the news to the State Department. Officials feared that if the U.S. government verified the news, “the way will then be open for further pressure from interested groups for action” by the Allies to aid the Jews. R. Borden Reams, head of Jewish affairs in State’s European Division, confided to colleagues. “The plight of the unhappy peoples of Europe including the Jews can be alleviated only by winning the war.”

Wise immediately organized a press conference in Washington that evening. He told the assembled reporters that Hitler had “ordered the annihilation of all Jews in Europe by the end of the year,” and that “this news is substantiated in documents furnished to me by the State Department this afternoon.”

The New York Times, which did not send a reporter to the press conference, published five paragraphs about it from the Associated Press on page 10, tacked onto the end of another story. The following day, the Times published additional details in six paragraphs at the end of a related story, which it relegated to page 16. The Atlanta Constitution buried Wise’s press conference on page 20, next to the train schedules. The major radio networks ignored it altogether.

In the months and years to follow, many excuses would be heard from the Allies as to why Europe’s Jews could not be rescued. But nobody could plead ignorance any longer. The news was not given the prominence it deserved—but the wall of secrecy had been shattered.

Although 77 years have passed since that fateful day when the Riegner telegram reached Rabbi Wise, the issues raised by that episode continue to resonate. How the U.S. government responds to genocide abroad, how the administration interacts with refugee advocates, and how the news media cover such events, all remain matters of pressing concern.