Benny and Joon and a Good Look at Schizophrenia 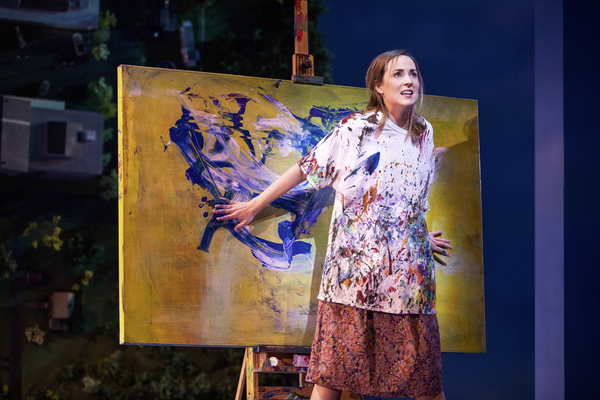 How do you stage a charming musical about schizophrenia? Was there ever a dimmer, sadder and troubling topic for a play?

Just ask the folks who run the Paper Mill Playhouse, in Millburn, New Jersey, where the new musical Benny and Joon opened on Sunday. It is delightful look at modern schizophrenia with three stars who are not only entertaining, but work hard to exam schizophrenia and talk about it on stage with candor, and with smiles, too.

Benny and Joon is the musical version of the 1993 movie of the same name that starred Johnny Depp. Schizophrenia was such a controversial topic in that year that the word schizophrenia was never mentioned in the script. Now, thankfully, it is.

Benny and Joon are brother and sister (he’s early twenties and she’s 20 or so). Joon suffers from schizophrenia and was a handful for her parents. They were killed in a cars crash when Benny was 18. Now, with them gone, Benny, who runs a car repair shop, has to raise her. All of a sudden, after a bad night playing poker, Benny has to provide room and board for a kooky young man, Sam, who comes to live with them. Sam, who wears and odd- looking hat, sees himself as the re-incarnation of Charlie Chaplin and Buster Keaton and mimics them. In one nice bit he uses dinner rolls as people and has them dance.

It starts with Sam’s arrival. Joon is relentless in her schizophrenic behavior and although Benny loves her to death, she drives him crazy. He faces the very real possibility of putting her into a group home with other mentally ill people. Joon, of course, wants to keep living with him and continue her amateurish career as a painter. He does not know what to do and consults Joon’s psychiatrist.

The story of the play is Benny’s fear of putting Joon into a home or, later in the play, a mental institution. Throughout the story, Joon exhibits numerous schizophrenic tendencies. She is moody, very happy and then very sad, convinced people are trying to hurt her, fearful of what will happen to her. She’s impulsive. She doesn’t listen to people. She’ argumentative, possessive. There is no typical schizoid, but Joon exhibits the qualities of many people seen as such.

Yet, though all of this you love her.

Kirsten Guenther wrote the book and the music and lyrics are by Nolan Gasser and Mindi Dickstein. They use their words and songs to suggest that while Joon might need help, she may not need all of the help that people suggest. They also get you to root for Joon. Isn’t she like so many quirky people we all know? Don’t put her away, people will say, just put up with her.

Sam, as he bops around the stage in a very goofy way, starts to admire, and then love, Joon. It’s an improbable relationship, to be sure, but so what? Where will they live, Benny asks his sister? The answer, as she frets, is well, who knows. We’ll get by.

Big brother Benny is scared to death. He is so, so worried about his sister and needs to protect her. What he’s going to do?

The success of the play is the work of the three stars, Claybourne Elder as Benny, Hannah Elless as Joon and Bryce Pinkham as the slightly nutty but thoroughly adorable Sam. They play their characters as lovable people trying to ward off schizophrenia.

The story is not about schizophrenia, but how it affects the families of its victims. It is the story, too, about how all mental illnesses affect families. We need more of these stories. There are tens of thousands of moms and dads, brothers and sisters, and have been throughout history, who have to live with and cope with mentally ill people. It is a struggle and Benny and Joon shows that in a majestic way. You need to love and support the victims of mental illness, not just toss them into a group home.

The music in Benny and Joon is OK, but none of the songs are memorable. Together, though, they create a nice atmosphere for the story. Some of the songs are painful, as they help to tell the story of the brother and sister and their wacky friend Sam.

The show’s director, Jack Cummings III, gets fine work from his stars, Elder, Elless and Pinkham, but also gets fine performances from the other actors in the play - Colin Hanlon, Paolo Montalban, Conor Ryan, Natalie Toro, Jacob Keith Watson, and Tatiana Wechsler.

Schizophrenia is a relatively new illness, not named by Doctors until 1908. Medical specialists today see schizophrenics as people with split personalities. They are, in general, wildly eccentric, believe other people are trying to get them to do things, feel slightly paranoid and see themselves embattled against just about everybody.

Benny and Joon, in the end, is both a sobering look at schizophrenics and a wonderful look at a pair of siblings who fight and feud, with the troubles of schizophrenia added, but, through it all, love each other.

We need more plays like this one. And more Bennys and Joons in this world, too.