A Pope of Firsts, But Will Francis Actually Change the Vatican?

Anthea Butler is Associate Professor of Religious Studies and Graduate Chair in the Department of Religious Studies at the University of Pennsylvania. Her most recent book, "Women in the Church of God in Christ, Making A Sanctified World" published on the University of North Carolina Press, chronicles the history of African American women’s religious lives, and civic engagement in the Church of God in Christ, the largest Pentecostal denomination in the United States 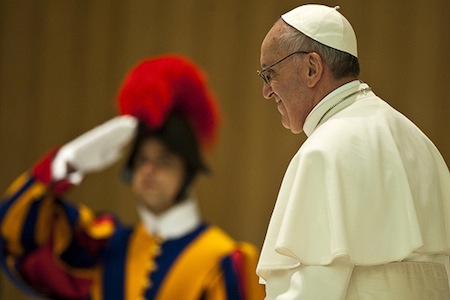 Pope Francis, the former Cardinal Bergoglio of Argentina, was installed on the feast day of St. Joseph as the 266th pope over the Holy Roman Catholic Church. For a religious historian like myself, his appointment has been a dizzying number of firsts: the first Jesuit to become pope, the first pope in the modern era to succeed a pope, Benedict XVI, who is still alive, the first pope from Latin America, and the first to take the name of Francis.

While all of these firsts are important, they also must pass through the prism of the Jesuits' history, the Catholic Church’s history in Latin America, and by Bergogolio’s own history in Argentina during the Dirty War. While Pope Francis’s ascension to the petrine throne may signal some change in the manner in which the papacy is lived out in front of the world, will it engender real, substantive changes in the Catholic Church, and its worldwide following?

By choosing a Pope from the order of the Society of Jesus -- or the Jesuits, as they are called -- the conclave made a choice that many thought could never happen. Founder of the Jesuit order, St. Ignatius of Loyola, believed that the quest for ecclesiastical dignities such as bishoprics would stifle the work of the Jesuits, whose order was to promote the gospel across the world. The Jesuits would follow the normal vows of poverty, chastity, and obedience, but also added language about the special care of the instruction of children and “a special Obedience to the Sovereign pontiff in regard to the missions according to the apostolic letters and constitutions.” The Jesuit vow of service and obedience to the pope did not always keep them in good stead with the papacy, however. The order would grow in numbers and missions around the world from its inception in 1540. Later, as a result of rumors and the fear of power of the Jesuit order, Pope Clement XIV suppressed the order from 1773 until its restoration in 1814.

Before the suppression, the order would come to Latin America -- first to Brazil, and then to other countries, including Argentina. The Jesuit missions to the Guariani peoples brought education, a university, and publication of books in both Latin and Guarani. The communities that Jesuits established there in the seventeenth and eighteenth centuries, reducciones, were Jesuit missions designed to house the church, the Jesuit Fathers, and the community of Guariani Indians. The remains of these spectacular structures are now UNESCO World Heritage Sites. When the missions were left unmanned by the Jesuit suppression, Franciscans took over, but not with the same degree of success than Jesuit missionaries had. The missions deteriorated and by the time the Jesuits returned, the missions were abandoned for cities and other ministries.

This backdrop of Jesuit history is important in understanding Cardinal Begoglio’s own history as a Jesuit and his time in Argentina during the Dirty War of the 1970s. Catholic clergy and Latin America has often been liked to liberation theology and the “preferential option for the poor” that Jesuit General Pedro Arrupe outlined in his letter to Jesuits in 1968. How the “preferential option for the poor” was practiced differed between religious orders, countries, and regimes in Latin America. For many priests, the "preferential option" meant embracing the poor, living amongst them, and entering into their struggles. Much like the early Jesuit missionaries, they cast their lot with the people of the land. Others, went further, embracing the Marxist ideals and ideologies that pressed against oppressive military and governmental structures. Yet all did not fully embrace liberation theology. Many priests, like Cardinal Bergoglio helped the poor, yet they remained conservative theologically, and acquiesced to the whims of the military dictatorships in order to save themselves and others.

The questions about Bergoglio’s time as provincial and leader are many, and the allegations of collobration have been denied by Vatican officials in the wake of his election and installment as Pope Francis. Many remain skeptical. Argentine journalist Horacio Verbitsky has extensively researched the Argentine Dirty War, and believes that Bergoglio’s silence and complicity with the military junta led to the arrest and torture of two Jesuit priests who disobeyed his orders to discontinue their work in the slums. At the time, Bergoglio was the provincial (leader) of the Jesuits in Argentina, the youngest to serve in that position. Bergoglio supporters tell a different story, saying that he tried to help secure the release of the Jesuits priests. The two stories then, form the foundation of the stories about Bergoglio’s time as a young Jesuit in Argentina -- either he was complicit with the military junta, or he was a protector, trying to save his priestly charges.

So while the “firsts” about Pope Francis’s election papacy have been widely touted in the news, it is Catholic history, the History of the Jesuits, and the history of then Cardinal Bergoglio that intersect with this historical moment. These histories converge in his person as the culmination of the Catholic Church and the Jesuit mission to Latin America that brought forth education and commerce, but also a destruction of indigenous religion and society. It is a history that bore the fruit of the most innovative parts of liberation theology, and at the same time, the shame of the Catholic Church in crushing that theology and those who believed in it because of the fear of communism. It is this history that Pope Francis holds in his own personal story, that now enters into the Church at a crucial time in its history.

In every way, Pope Francis’s history as a Jesuit, his time in Argentina, and his ascension to the papacy fit into the narrative history of the Catholic Church. Like the church, the pope has a complicated history of activism and presumed complicity with the structures of power. He is traditional in his values, yet seeks to put a face on the church that is friendlier than his predecessor. Time will tell what kind of pope he will eventually be, but if history is any judge, Pope Francis’s many firsts will not be his last, and he may continue to operate as Mary Hunt put it, in a Jesuitical fashion as pope.